The blade is truly the most important part of a paddle. There is a lot of things to think about when choosing the blade. Not just the size but also the profile shape and the spine affects it's usage greatly.
I will list a few comon blade shapes and talk about their good and bad sides. 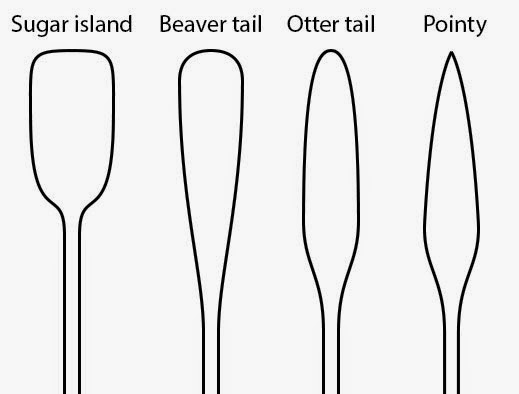 Sugar Island
The Sugar Island shape is the one you find on most cheap paddles and almost every plastic one. It's a wide blade with even width all the way to the tip where it ends abruptly. Why this shape has gotten so comon is a mystery to me. The great width and blade area makes it very heavy to paddle with compared to a narrower blade. The only place it really excells is in shallow water where you want lots of blade surface near the tip to scoop more water. And in rapids where you need lots of blade area because of all the air in the water. They can also break easier since the wide tip easily gets stuck in between stones and breaks off a side of the blade.

Beaver Tail
This is probably the most comon shape among more experienced paddlers. It's a great blade which works in almost all situations. It is narrow near the shaft then widens out towards the rounded tip. The wide tip makes it good in shallow water and gives some extra power while steering. Because it is narrower near the shaft it's possible to do very effective C-strokes and bends really close to the canoe.
The biggest drawback of the beaver tail is that it's hard to balance the paddle since there is a lot of material out at the tip. It can also get tougher paddling with a beaver tail because the wide area of the blade is so far from the pivot point.

Otter Tail
My personal favorite. The blade is pretty much the opposite to a beaver tail. It's wide near the shaft and then narrows toward the tip, which is usually rounded on these too. With a narrow tip it's very easy to paddle for great distances, the resistance is very low. And balancing the paddle is usually not too hard for the maker. The wide part near the shaft can get in the way when doing C-strokes sometimes. And on shallow water you don't have a lot of blade surface to use.

Pointy tip blades
I find these blades the most interesting ones. I do not know of a name for these paddles but they are historically very common. They exist in both otter- and beaver-tail forms. Some say they used the pointy tip as a weapon for spearing fish and for fighting against neighbouring tribes. While the fish-theory sure could work for some of the blade designs, that's definitely not the case for all. Some have the tip in a very wide angle which makes it pretty much impossible to spear anything with it.
My personal theory is that a pointy paddle blade lasts longer. It might seem strange at first. Won't a pointy tip take all the tear and wear and be weak because there isn't a lot of material? Yes true, but some wear on the tip is not really a problem. Sure it will get blunter over time but who cares? The most comon ways for a paddle to break is either the shaft breaking or one side of the blade splitting up. On a pointy paddle this isn't very likely since the wear will be in the middle where the fibers go all the way through the paddle. And there are no sides that can get stuck between stones and force it to break.
It's said that the pointy tip will enter the water quieter. That may be true if you really put down the paddle carfully but during normal paddling I don't see a difference.
The obvious drawback of a pointy paddle is steering. J-strokes don't give very good response. But Canadian- or northwood strokes works fine as you steer with pretty much all of the blade.

Of course there are more blade types than these but I think these cover the main forms and from this you can figure out the effect of other shapes. Now for the size..

Blade size
A narrow long paddle will go easier in the water than a wide short one with same blade area. But the wider one will give more power. This is because the narrow one have longer edges where the water can slip by.
In many cases though, the long narrow one is to prefer. it puts less strain on your body and you can move it faster in the water which produces more speed.
There is a formula which says if you double the speed of the blade in the water it has the same effect as paddling at normal speed with a 4 times bigger paddle blade. This means you can sometimes increase your speed by making the blade smaller. (For more information on this I recommend a look in "Sea kayaking: A guide for sea canoeists" by Philip Woodhouse. You can read it for free by pressing the link. It's on page 27 and of course applies to Open canoes as well.)
Bigger blades are preferred when doing Freestyle canoeing (For better steering) or paddling rapids (Because there is a lot of air in the water.).

Spine
The spine of the paddle is the part where the shaft extend on the blade. It usually covers about 1/3 of the length of the blade. It's main purpose is to make the blade stronger and not too flexible. The spine can either be an even bevel from the middle to the edges or a visible bump in the middle that looks like the shaft continues into the paddle. The visible spine saves some weight as you can remove more material from the blade. But it can also make it a bit wobbly in the water.


Now that's it for my Open Canoe Paddle series. I hope you enjoyed it! Please leave comments and let me know what you think.
Upplagd av Jonas Sjöblom kl. 09:33