2 old paddles saved from getting burned

My classmate found these 2 beauties in an old barn and saved them from getting burned in a big clean out.

One of them seem to be a child model as the blade-area is very small and the shaft is shorter than on the other. What confuses me though is that the grip and shaft is way too big for a child.
The other seems to be an ordinary beaver tail.
From what I can tell they are both made with a pine core and laminated spruce on the grip and blade with a worn out varnish finish. I guess the material choice was just because pine and spruce are easy to come by here and it's easier to find long knot-free pieces of pine than spruce. 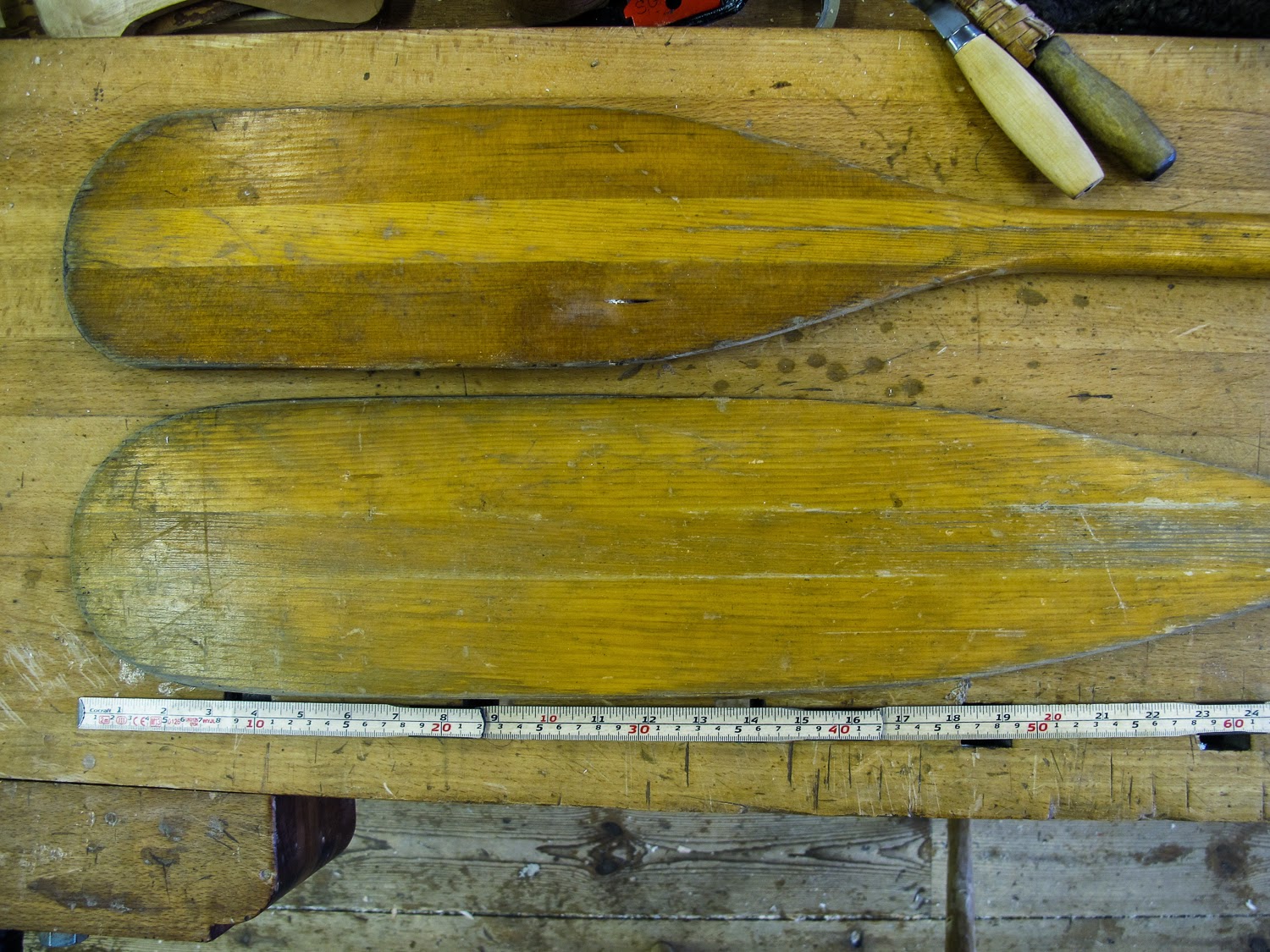 Since I can't find any sign on either of them they're hard to identify. But there hasn't been a lot of commercial paddles made in Sweden so I made some research. I assumed they are made commercially as the lamination on one of the grips is quite advanced for an amateur without proper tools.
In Swedens digital museum I found photos of very similar paddles made by ABC-fabrikerna which made sports and outdoor gear between 1909 and 1982. The grip lamination seems to be the same as on one of the paddles I got. The spine has the same sharp edge as mine and the grip shape and overall "feel" matches well too.
Though the ones in the museum is made from pine. But it could be a miss-identification on my part. Or maybe they used both spruce and pine.
Hopefully I get a chance to visit that museum in summer when I work with kayak rental nearby.

One of the paddles had an interesting detail on top of the grip. I'm speculating in if it could either be a rest from a lathe if the shaft was turned, or a hole where a metal piece have been stuck in for balancing the paddle. It looks like a drilled hole with a wooden plug. The other paddle has something similar but smaller. 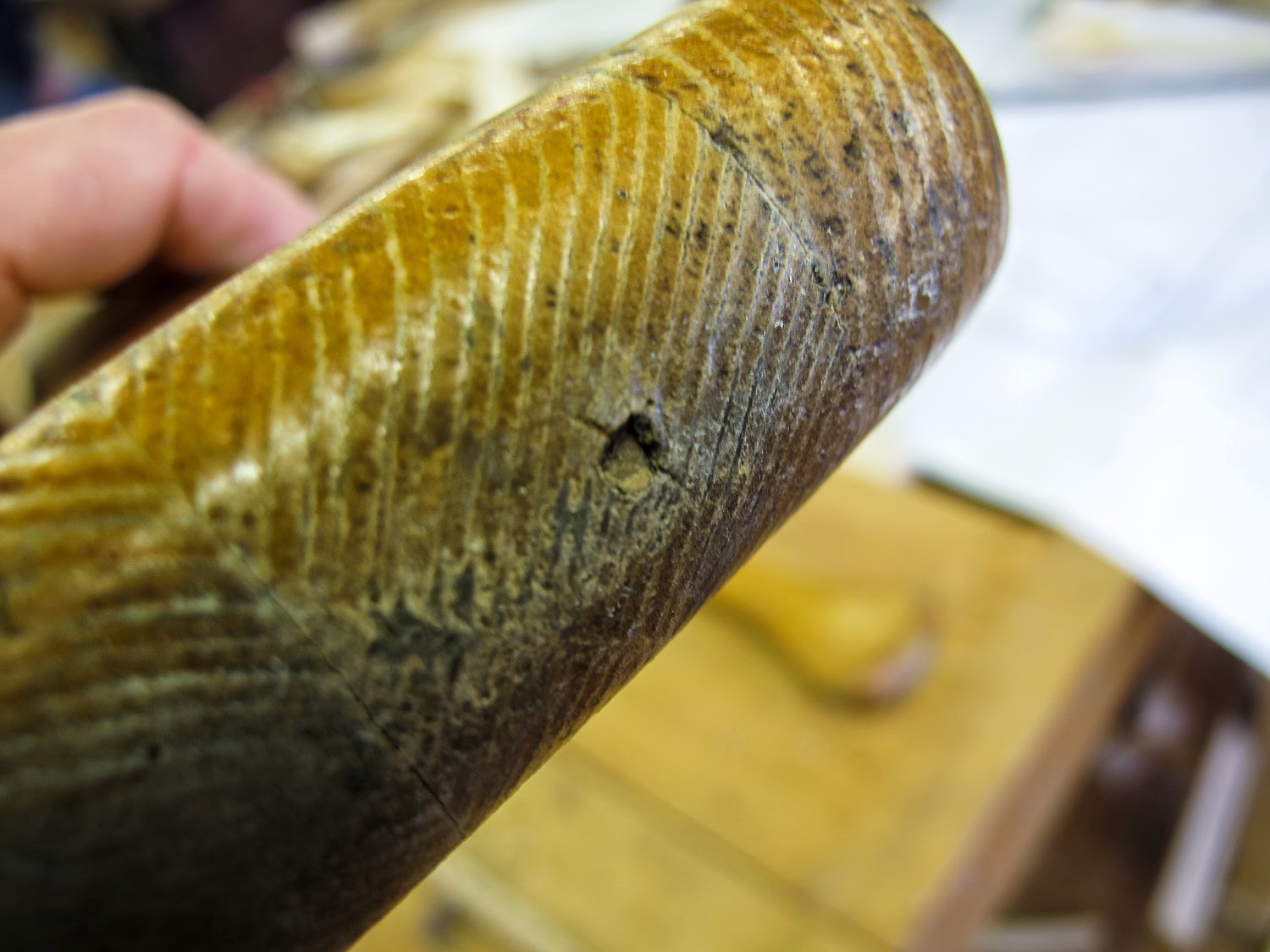 If you know anything about these paddles please let me know!

While researching these paddles I got some insight into Swedish canoe history. I find it really interesting to see how the skills of canoe building have spread and it gives me a sort of stronger feeling of connection to the Swedish canoe history. As we are not many who build and paddle wooden canoes here anymore.
The man who introduced and started building open canoes in Sweden was Harry Macfie. Who spent over 20 years in Canada as a gold washer, trapper and mining engineer. While there he learned the art of building wood canvas canoes.
He came back to Sweden and 1927 he started building wooden canvas canoes in his workshop at home. His canoes soon became famous as real works of art.
1938 the production was taken over by Mårten Gedda after Macfie sold the rights to ABC-fabrikerna.
ABC-fabrikerna produced hundreds of canvas canoes a year for many years. So when you do find an old Swedish canvas canoe it is almost always a Gedda or in rare cases a Macfie.
Today I only know of 2 people who make and sell canvas canoes. One is my old teacher Bo Weslien who mainly makes his own model called Lom, which is an amazing solo model with maneuverability unlike anything else I paddled. And the other is Magnus Carlson who also works as an outdoor teacher but builds canoes in his free time, mainly Prospectors.
Ove Larsson, another teacher (what's with teachers building canoes?) builds canoes with his 9th grade students and holds weekly canoe and kayak building courses.
Upplagd av Jonas Sjöblom kl. 06:20 Inga kommentarer: 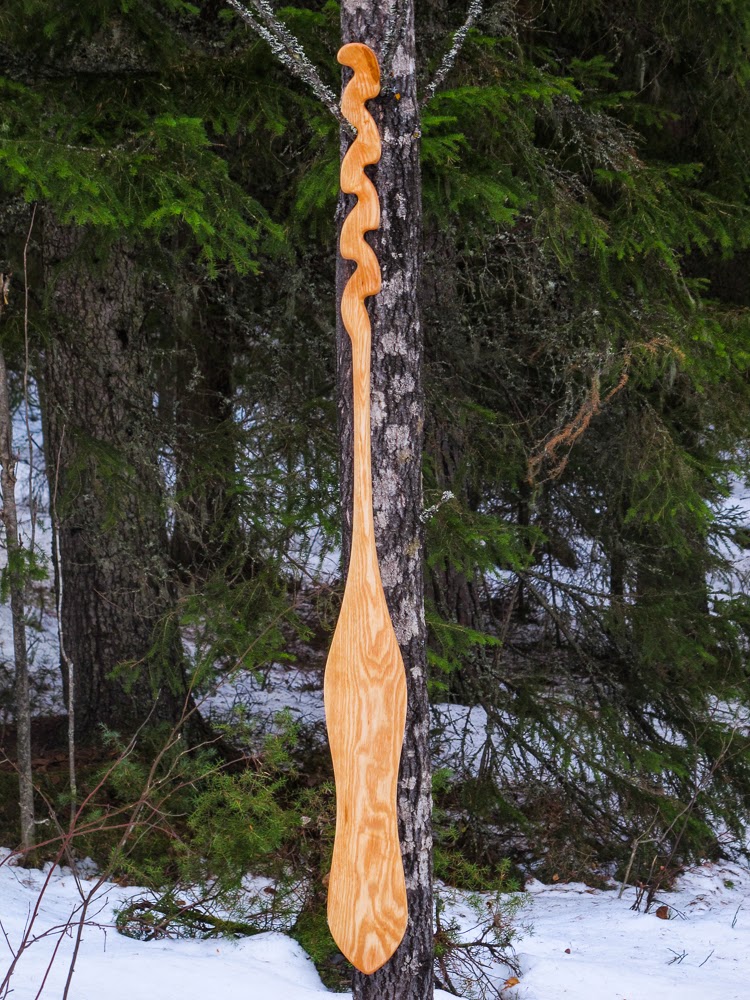 I put a lot of thought into this paddle. It was on the sketch board for a few weeks before I was pleased enough with the design to start building it.
My idea was to make a paddle with a kind of north woods grip for adjustable length. But allowing a more comfortable grip by tilting the hand a bit. At first I worked with ideas of a symmetrical grip. But then I realized an asymmetrical grip will give more specific length options and a stronger construction. I'm still waiting for the oil to dry so I haven't taken it for a sweep yet.
Shaft length: 80cm (31.5")
Blade: 74cm (29") 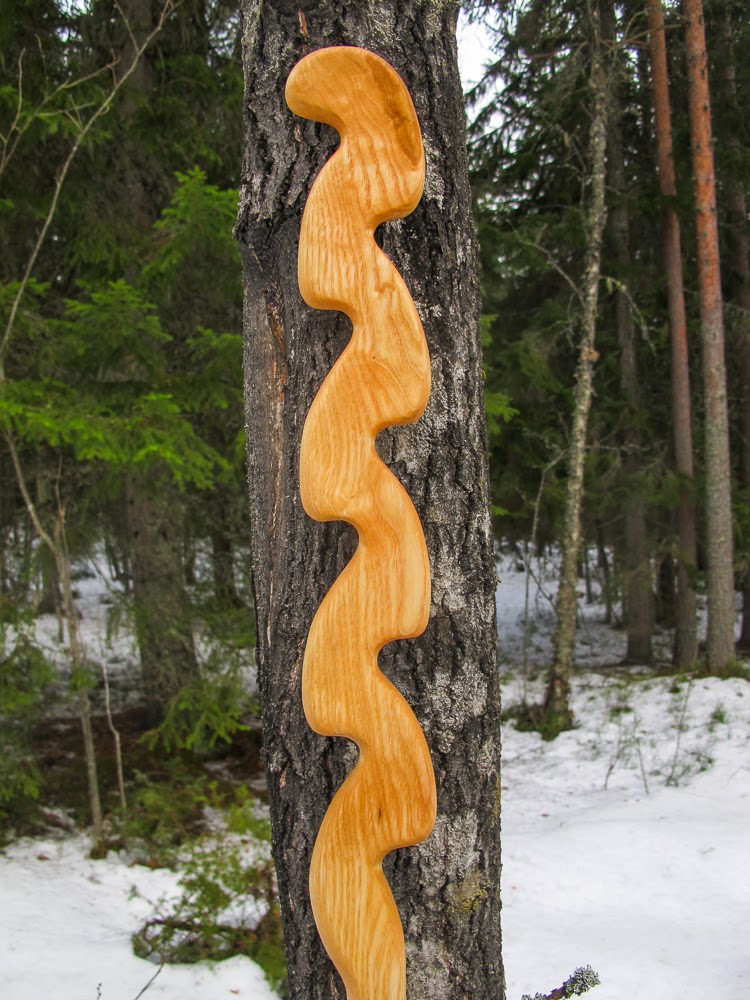 All the way through the middle of the grip are 9mm (1/3") of unbroken fibers for strength. And to further strengthen the grip there is some extra material on the opposite sides of the concavities. 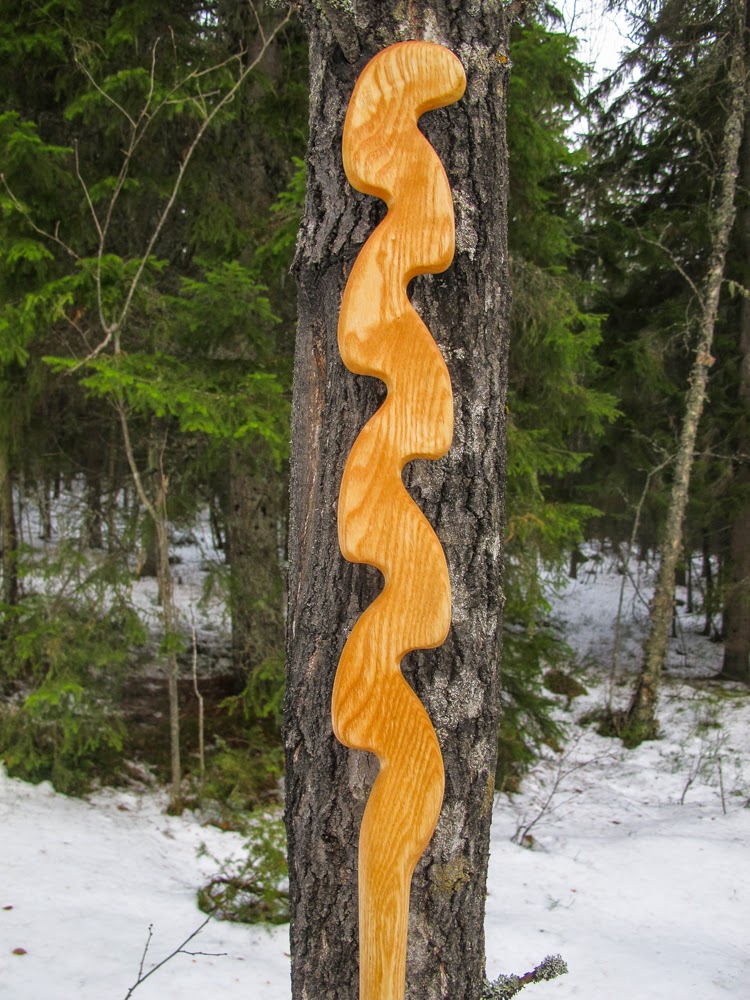 Each grip is approx 9 cm (3.5 inches) and the hand comfortably slides over to a grip on the other side when I flip the paddle for for example an Indian stroke. 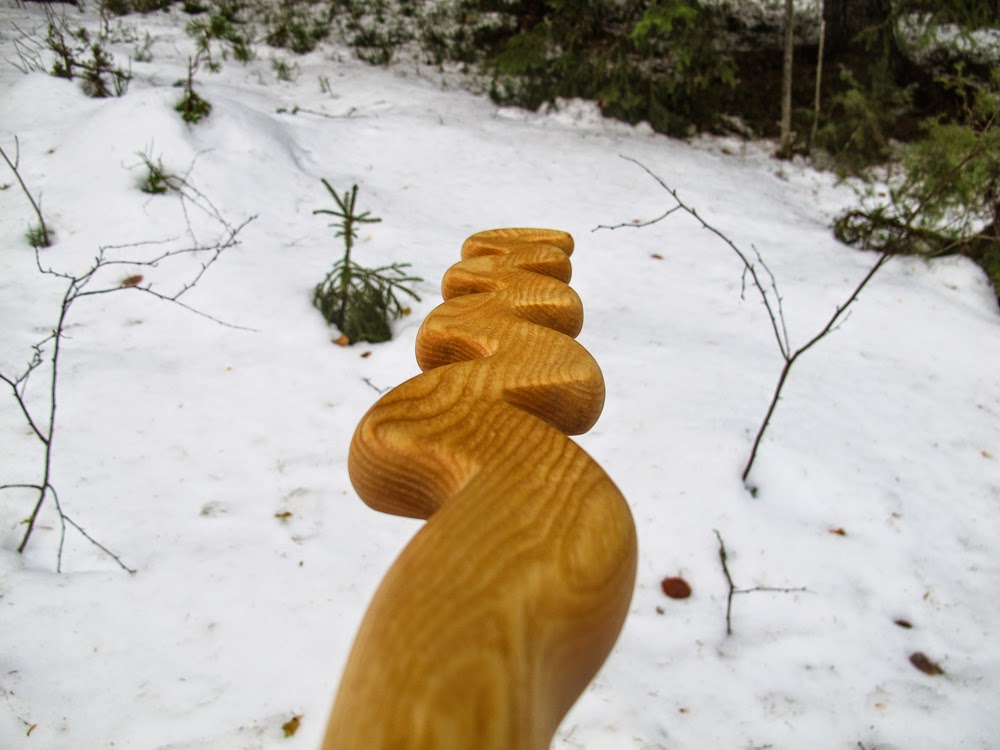 I couldn't get a good photo of this. But the grips are a bit thicker than the concavities, which gives a more relaxing grip. 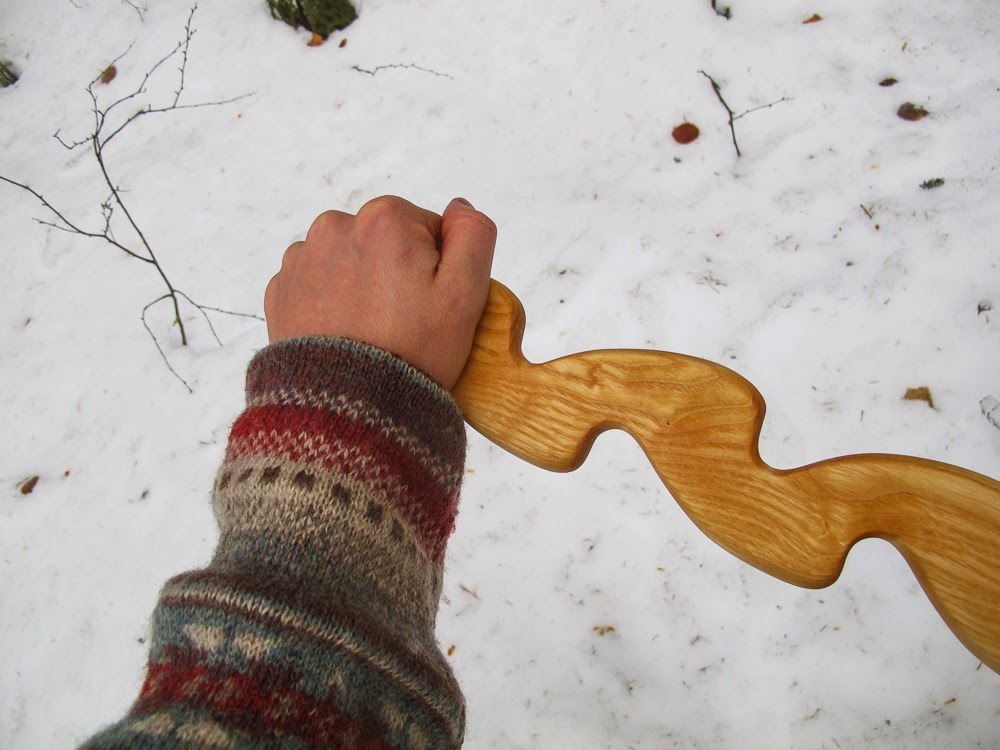 Holding the top grip one way is nice for distance paddling. 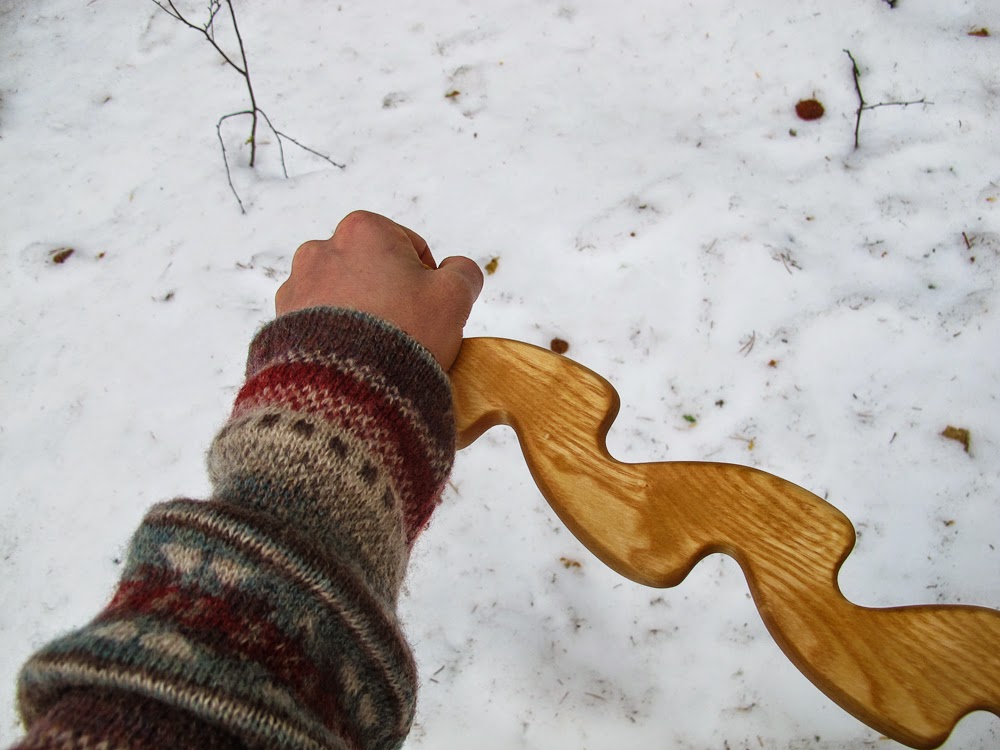 And flipped the other when you need a more firm grip of the paddle. 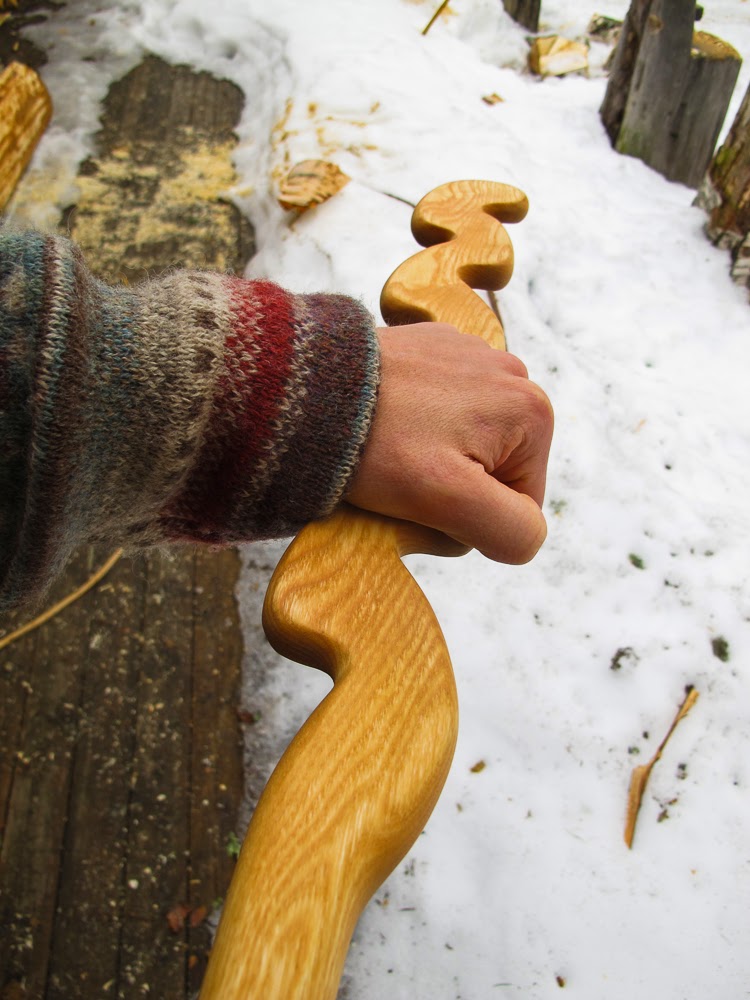 And holding the side-grips. IMO the most comfortable way to use this paddle. 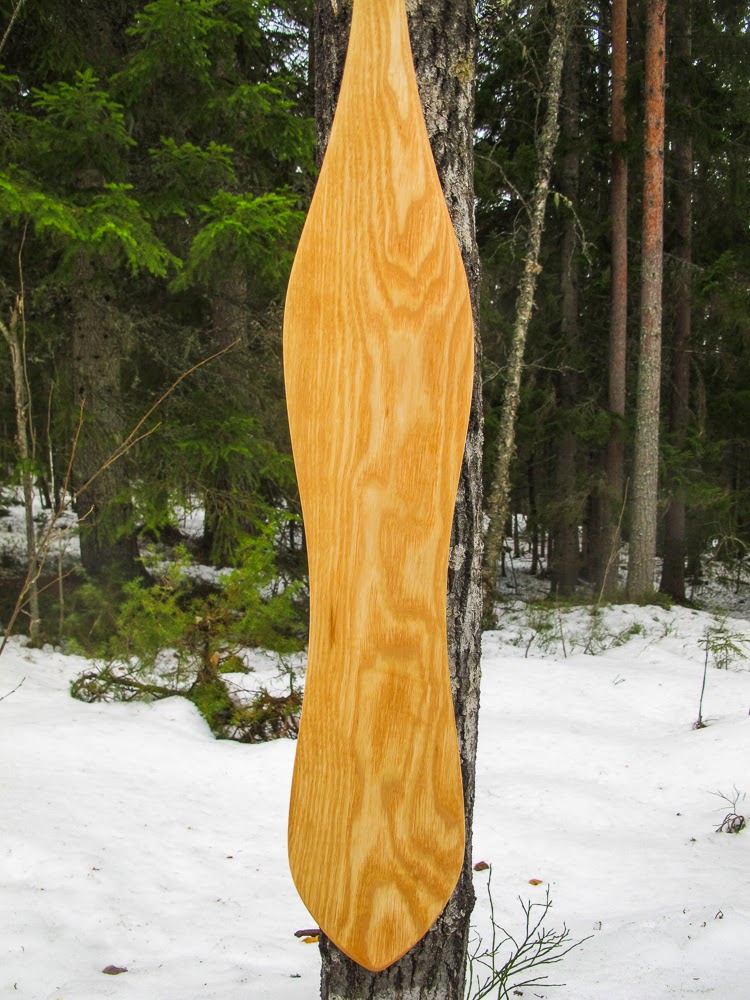 I did not put as much thought into the blade as into the grip. But I wanted a form which has the same feel. It turned out as a curvy design. The narrow part got a bit more narrow than I had planned because of a malfunction in the band saw. But I think it still turned out okay.
The wide part in front should give some extra power for steering strokes, while hopefully still being quite relaxing to paddle forward with because of the narrow middle.
Upplagd av Jonas Sjöblom kl. 03:13 Inga kommentarer: