So, time for the last update on the project.The paddles are hanging from the roof and waiting for the oil to dry. And I'm even too tired to enjoy being done with them. But I think it's nice to get some distance now, then I'll enjoy them much more later.

Since my last post I've formed the grips, smoothed the surface and oiled them. And I've learned a lot from this. Especially how to make, prepare and use cabinet scrapers. But let's take the grips first.
I did most of the forming using spokeshave, knife and gouge. I used the spokeshave where I could then used the knife in the notches and the gouge for wide concave surfaces, like the fat part you grab on the grip. 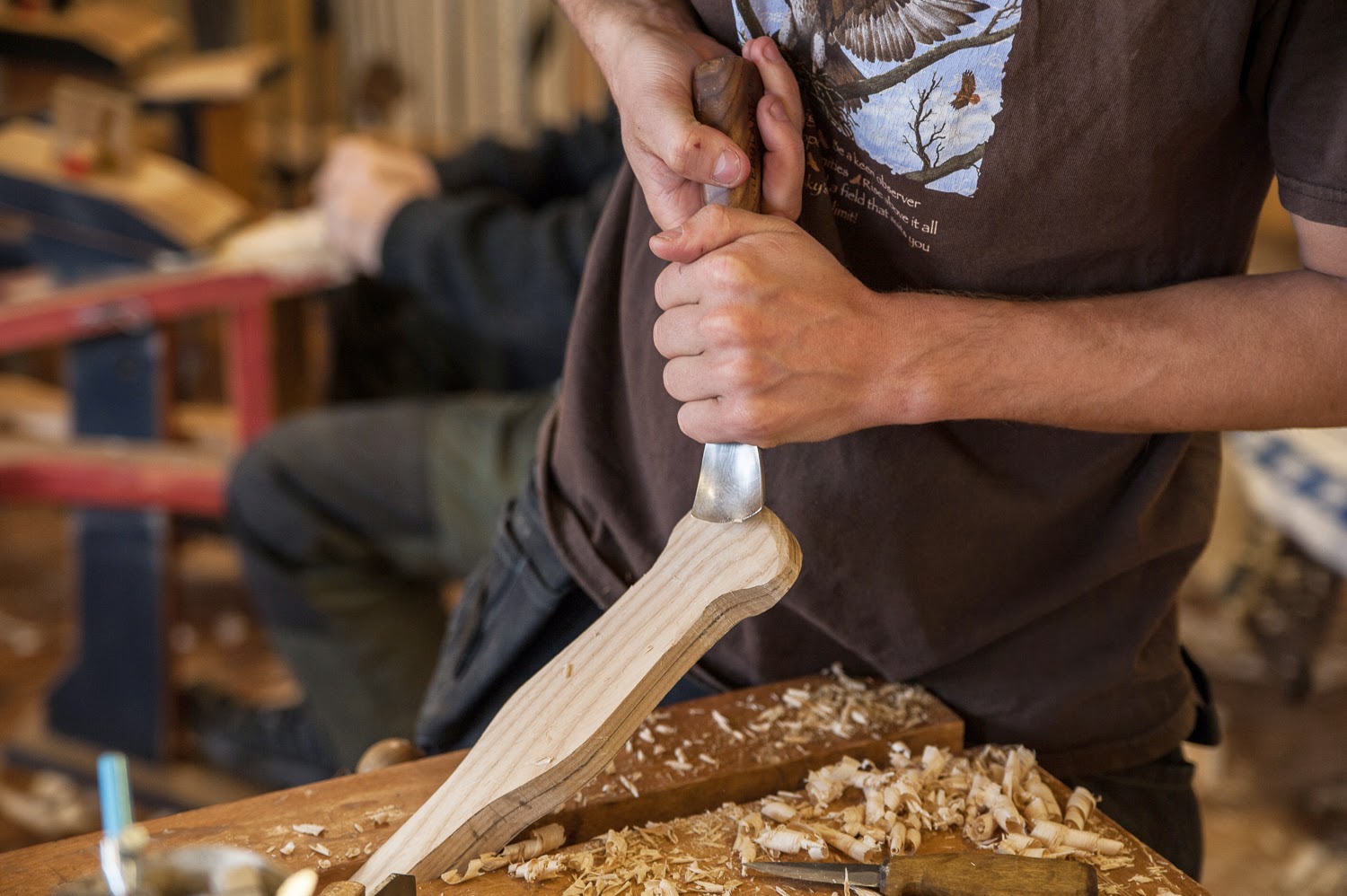 Roughly forming the grip went really fast, much quicker than I had thought it would. But in return the fine tuning of everything took longer. I saved the shaft for last since a square shaft makes it much easier to clamp the paddle to the workbench.
As I mentioned I used a cabinet scraper to smooth the blade. I made this myself from an old felling saw. I used an angle grinder to cut it out roughly then fine tuned it on the bench grinder. Then just followed the standard sharpening procedure for cabinet scrapers. It worked very well, I gave it a slightly convex edge on one side and a concave on the other. And after using it and playing around a bit I found that I could attach it to an old felling saw handle for much more comfortable and effective use. 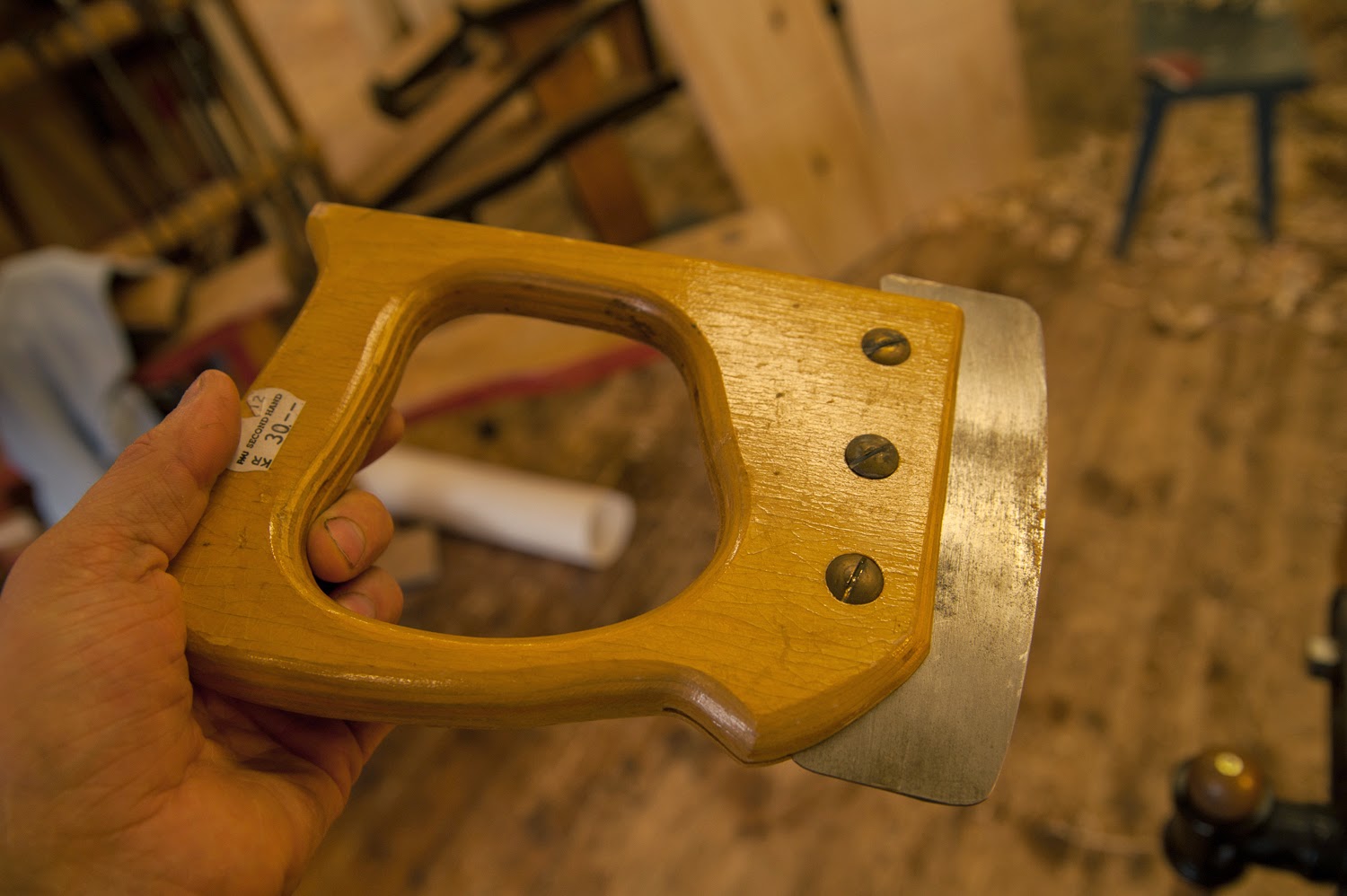 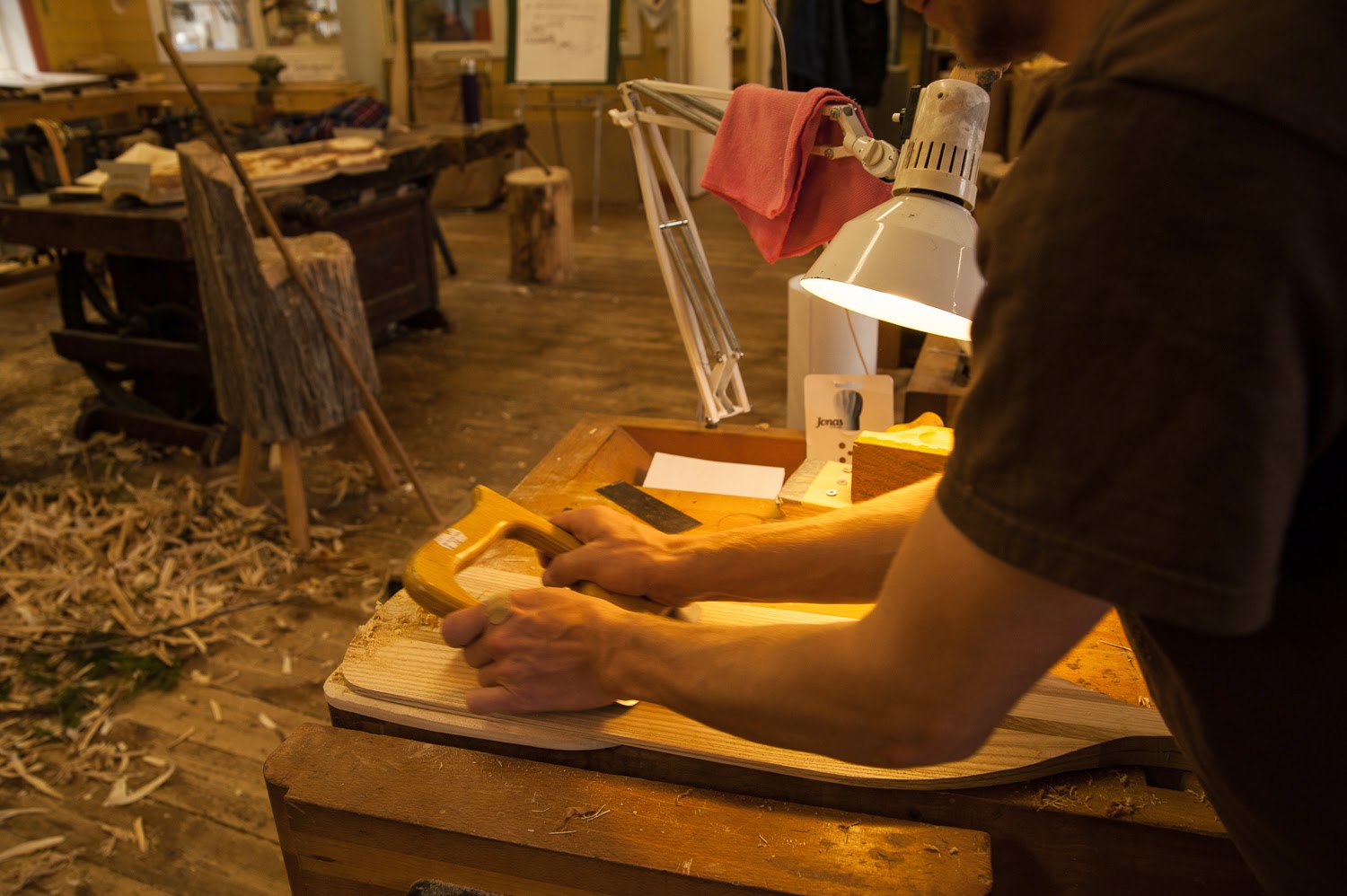 For rounding the shaft I made and used a tool described in Graham Warrens's book Canoe paddles - a complete guide to making your own. It's a small plank with two pegs sticking down and between them pencils marking the lines. The proportions should be 7:10:7 to get the lines in the right place. Then I just held it angled and drew the lines on the shaft. I also added one pencil in the middle to mark the middle line at the same time. But in the end it didn't work very well to draw all three lines at the same time so I just knocked down the pencil I wanted to draw with and repeated for each line. 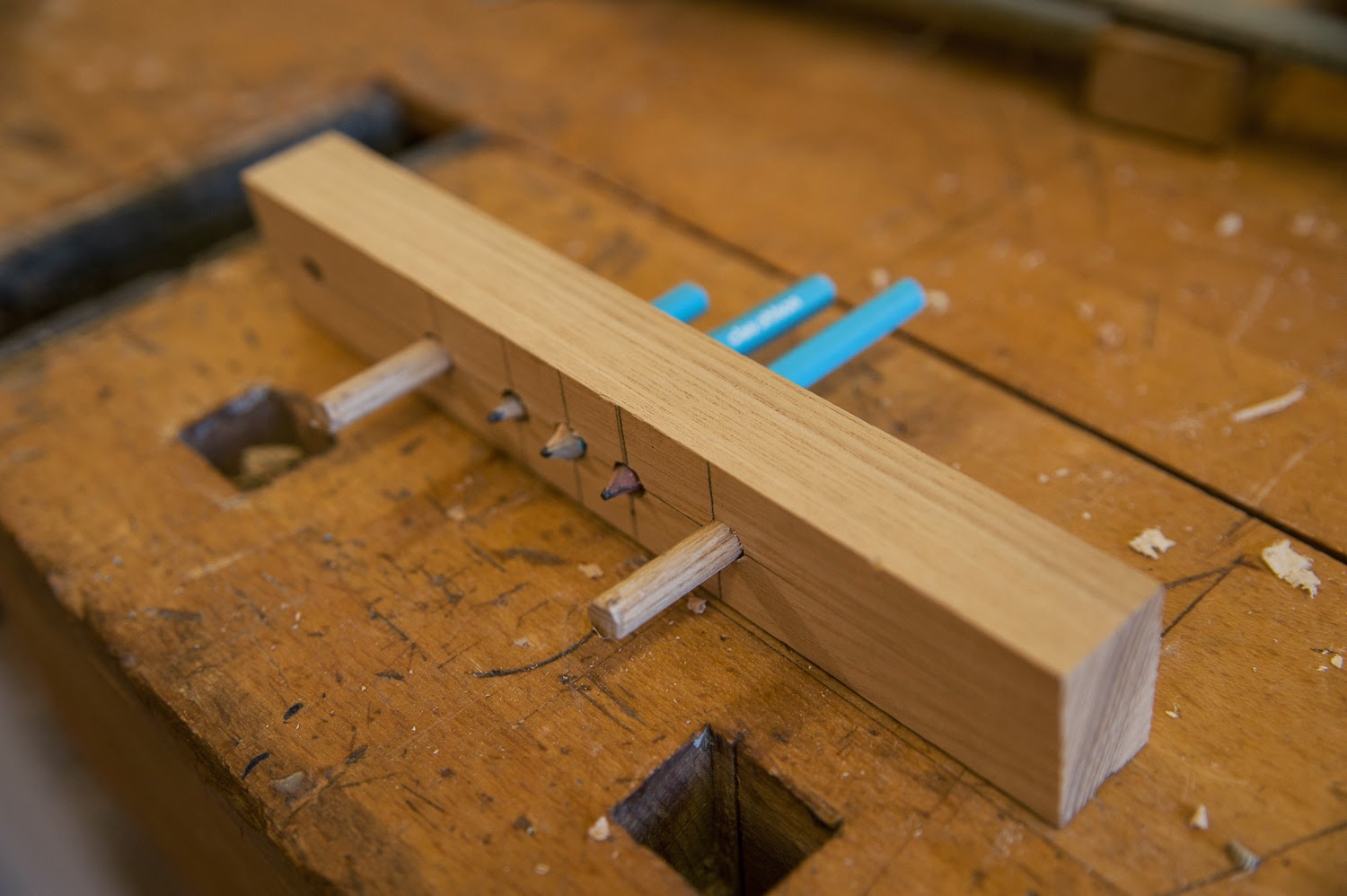 Another very useful tool I made for the rounding of the shaft was a cabinet scraper shaped after the shaft. After 8-siding and 16-siding the shaft I just used this scraper to get it round. Unfortunately I didn't make this until after I finished half of the paddles. So the first ones didn't get the same perfect roundness. 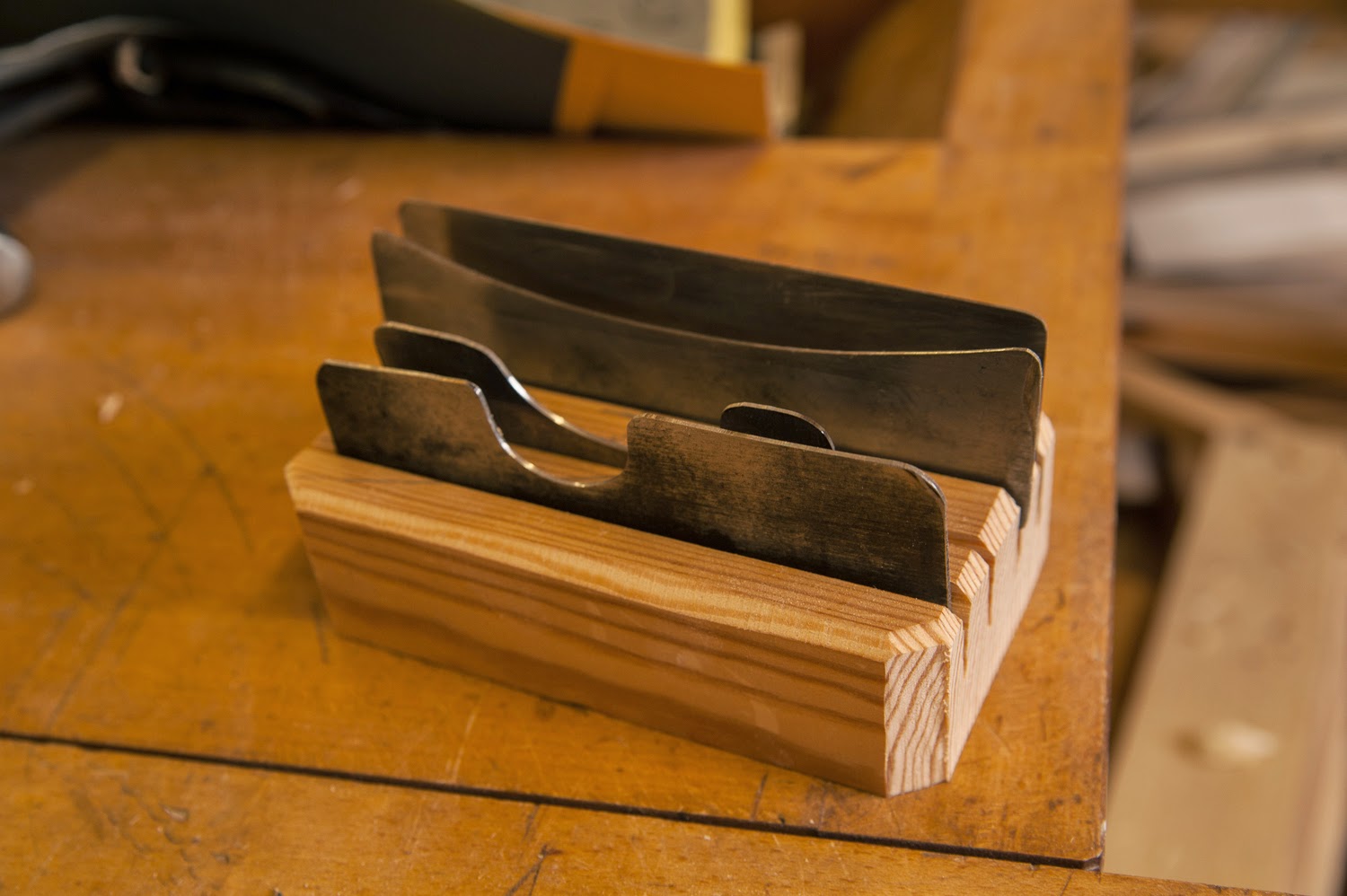 I used sandpaper on the modern design ones. I started with 120 grit, then 240 and finally 600. I wet them to raise the fibers then repeated with 240 and 600 grit a few times.
Finally I oiled them with cold pressed raw oxidized linseed oil, just rubbing it in with my hand, then did a few strokes with 600 to remove any raised grains and wiped them off as much as I could with paper towels. 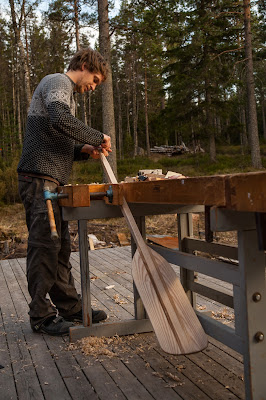 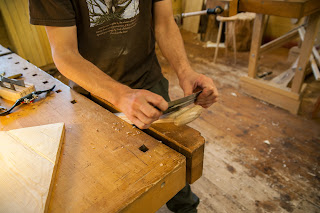 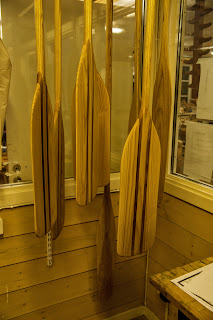