I'm down on the level of details now. So today I've been working on the holes for the sticks that keep the tipi together, the rings for the smoke flaps and the loops for the tent pegs.

I started by marking the holes. I put them 17 cm apart, and to keep them in line I used a square edge. It was raining today so I had to do everything inside which was a bit tight. 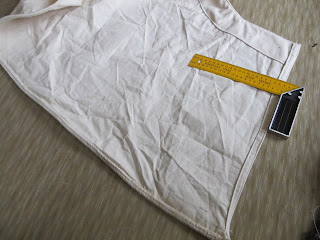 After the holes were cut I started on the rings for the smoke poles. I got inspired by this drawing, and wanted to try something similar. So first I marked out the inside of the ring and made a cut. 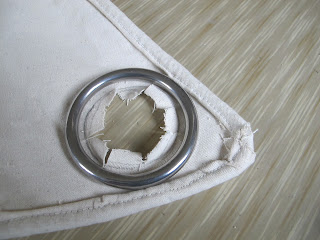 I then sewed around the ring two rounds. It looks quite messy. On the picture this is how they suggest it. But I' very skeptical to how long the thread would last. I can see the ring falling of in just one summer. So I reinforced it with leather to protect the seam.
To make it last even longer I took the opportunity to put raw linseed oil on everything, since it will be under the leather when I paint the tipi. I also greased the leather on both sides.
I'm actually very pleased with how it turned out. I did the leather-sewing using my (not so) speedy stitcher. 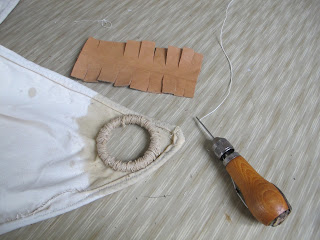 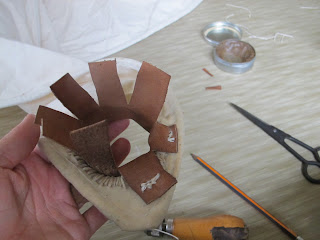 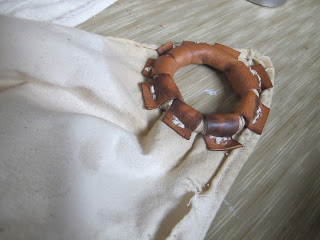 The last thing for today was the tent pole loops. Many tipi plans suggest eyelets, but my experience is that they gets loose from the fabric or the fabric breaks very fast. It's much better to spread out the wear as much as possible. So using some kind of bands works very well. I didn't have any ready-made bands so I followed my friend Lovisa's tipi sewing description (Swedish but good pictures).

I cut 12cm wide pieces of fabric which I folded to the middle from both sides. Then folded it in the middle and sewed together. From this I cut thirty 29 cm long pieces.
I also made reinforcings from 15x15 cm pieces of canvas as described in pictures in her blog. After sewing 12 of them I ran out of thread. And tomorrow is Sunday so I might have to wait till Monday to finish it. Maybe I will take a well-deserved day of rest and go canoeing. 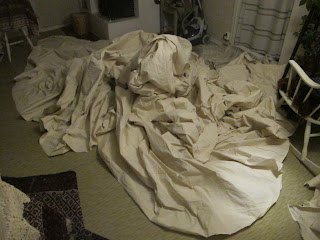 Last days I worked a lot on the tipi, despite this horrible cold that won't leave me alone. Guess I should rest, but when I have a project going on I just have to finish it!

So yesterday I sewed the 4 big pieces together. I have this amazing sewing machine, a Husqvarna from 1940-something. It has been working amazingly well. it can only do straight seams but I don't really need any other for the tipi. Unfortunately the machine isn't mine. It's my ex-girlfriends. But if I got the chance to buy one I would do it right away! It even beats my Bernina 830.

So I sewed the big pieces together with lapped seam not sure if this is the correct English word). Either way it's done like this:

It's important to check that the seam end up the right way, so the rainwater flows off the seam and don't get stuck there.
When I cut the fabric I made sure to mark the center on each piece. So when I needled them together I got them centered. The first part of the lap seam is quite easy. You can just let the fabric go on the outside. The second part however you need all the fabric at one side of the seam to go though the machine. To make this easier I made sue it was the smaller side I took through, and I rolled up the fabric on both sides of the seam. 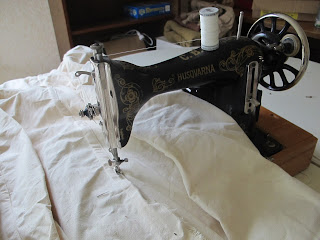 My house is quite small, definitely not big enough for a whole tipi. So when needleing the pieces together and rolling it I took it outside. I got lucky and didn't have any rain. I got some ants and leaves on the floor but I can live with that.


Since a tipi needs to be round I needed a big flat surface to draw on. My lawn isn't very flat. So I had to find another place to do the drawing. Unfortunately I forgot the camera. But I did it on an empty parking lot. I used an old tire and a stick to make the center point. Then attached a rope to draw the (half)circle. I cut it at home using my, if I may say so myself, awesome home made rotary cutter. 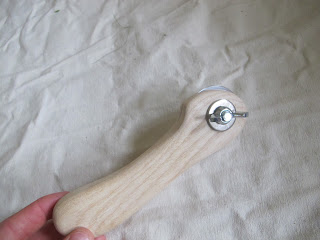 I then proceeded to sew the longest seam on the tipi. I folded the edge of the circle around a hemp rope and sewed straight through it. I thought this would never work, way too thick... But the machine did it as easily as if I was sewing in cotton candy. Or well, almost. I did break two or three needles. But except that there was no trouble. Not that it's important that you sew this seam on the inside of the tipi. Otherwise it starts collecting rainwater and rots.

The next day I proceeded with the middle of the straight side. Which is the highest point of the tipi. This is where you attached the last tipi pole to raise the cover. It's a critical part of the tipi, also because it is the area that needs to fit around the meeting point of the poles. So it needs to be strong and the right size (which you most easily get from other tipi descriptions.

After some measuring I made the lines from a form I cut out, to get it the same on both sides. I cut inside the lines though because I need some fabric to wrap around the rope later. 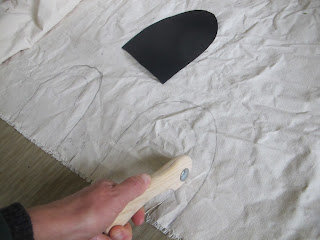 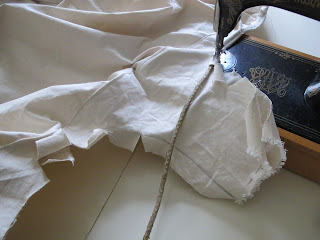 Before adding the rope in the picture above I added the smoke flaps. On them I have a rope extending from the lower edge up to the top and over to the other flap. I also added a 2 meter rope for attaching the cover to the pole on the end of the middle flap.

Finally today I cut the doors. Deciding the width was quite hard, theoretically it's 65cm now. I will see how it turned out when the tipi is up :) I also hemmed the edges of the door using a separate piece formed after the side of the door, to make it more stable. 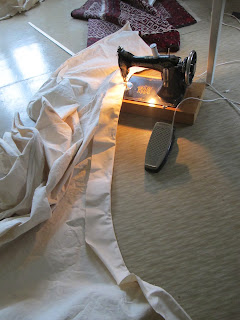 That's all for today! I'm starting to get done with all the big pieces. Soon all that's left is the boring hole sewing and making the loops for attaching it to the ground. And after that of course I need to make the door and the lining.
Upplagd av Jonas Sjöblom kl. 11:37 Inga kommentarer:

A little update on my tipi project.

I now have 12 of the 14 poles for the tipi. I make them out of spruce, mainly trees which are already dead. I have removed the bark from five of them, and god it's heavy work. Each pole takes 30-60 minutes. The biggest problem was that they move around and turn when I try to use the drawknife on them. But after a while I decided to strap them and it got much easier and faster. Now I average a little over 30 minutes per pole. I put as as a goal to do two per day... But now a cold is delaying me a bit. Either way there is no hurry with the poles. I won't put the tipi up until spring I think since I plan to paint it and need to do that in spring weather. 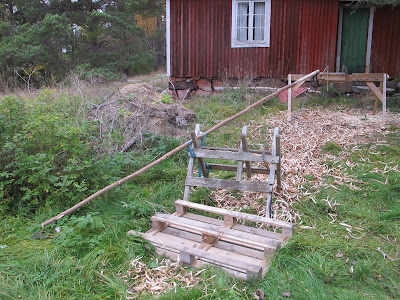 The fabric arrived yesterday. It doesn't seem too thick to sew with my machine. However it's a bit lower quality than I had hoped. The threads are thick and a bit loose. And there is no impregnation. As much as I hate synthetic impregnation I think it's important on a tipi in the climate up here. So I might have to impregnate it myself. If someone has tips of what to use, please let me know!

Here is the complete list of materials and prices (updated)
800m extra strong polyester sewing thread 26€
80m cooking cotton thread for hand sewing 6€
10 sewing machine jeans needles 18€
Set of hand sewing needles 3€
2 steel rings (for smoke flaps) 4€
60 meter of braided hemp rope 10€ on second hand (only 40m is actually needed)
1l tar for the painting 17€
Pigment (red iron oxide) for painting 2€
I will also use raw linseed oil for the painting which I had from before.
The fabric was 151€ plus 39€ extra vat because I live on Åland and we have to pay double vat here...

I mixed the paint already to get the proportions right. What seems to work is this:
1 dl tar
2 dl linseed oil
3 tablespoons of red iron oxide pigment

Now the sketch is final. I might start cutting the fabric today if this cold allows for it. Click it to see it bigger. The star is the center of the circle. It's outside of the tipi to make it tilt back a bit. A tipi is not a perfect cone, and the bottom is not circular but oval. The cone is tilted back a bit to give a straighter back wall which gives more room to stand and less risk of dripping from the poles over the sleeping area.

Update: As usual nothing is ever final. So I have updated the sketch again, October 19 2016 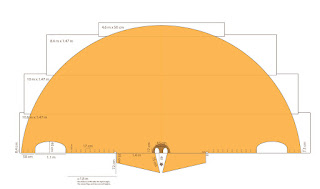 Since the mushroom season has started here and my house isn't dry or warm enough to dry them, I decided to make one. It took me only about one hour and all I needed was a file cabinet, a cab heater and some net.
I removed the bottom from the drawers and replaced them with net.
To make an opening for the cab heater I removed the bottom drawer and only kept the "door" which I sawed a hole in and screwed in place.
At the top was a cutting board which I kept to regulate air flow.
Simple as that! 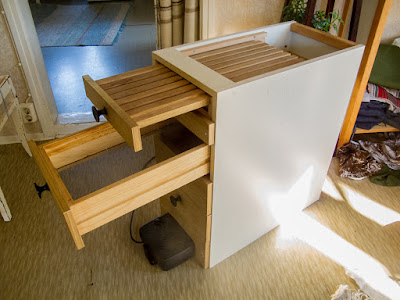 Now for the bucksaw. A few months ago I made one for my dads birthday. And it turned out so well so I made one for myself too.
The design is completely my own and if someone want the plans I can send them as PDF. 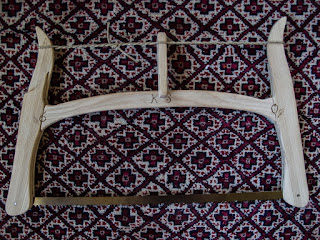 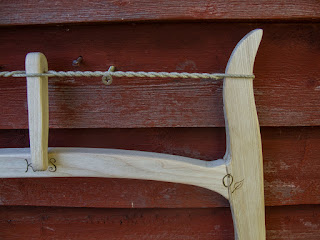 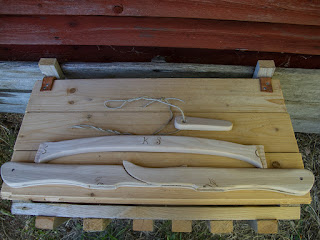 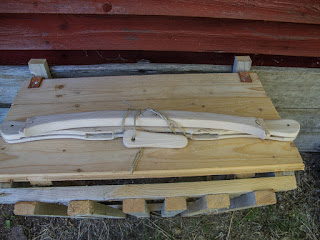