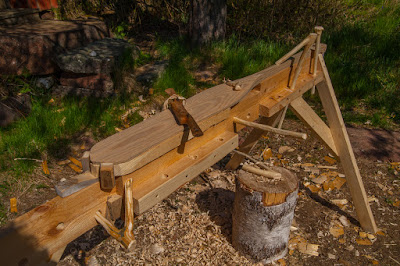 I've been looking around for ideas on workbenches especially made for paddles, but have not been able to find any. After a lot of thinking I came up with this idea. I'm sure there are a lot of ways to improve it, but so far it has worked wonderfully. I made this in spring, and wrote this post in spring. But I forgot to publish it.
If someone decides to make one I'm very curious to hear how it works and if you have thought of any improvements!

The criteria were:
- Easy to attach/detach the paddle.
- Possibility to work with any (realistic) length paddle and blade.
- No obstructions for the spokeshave/plane, even when using it in near vertical position.
- Easy to move the whole workbench.
- Both a blank and a shaved blade should get support underneath.

The basic idea is a permanent support for the shaft and grip and a blade support which can be moved to adjust the paddle's overall length and also moved up a bit to support a blade which is thinner than the shaft. For holding things in place I use wooden holdfasts. Mine are made from branches of ash (or any hard wood) but there are also iron-versions you can either buy or forge yourself. Normal clamps works too, but they take too much effort and time to adjust imo.

The base is a thick wide plank, with part of it narrowed down (see picture at end of post). On the narrowed down part a slightly blade-shaped plank with 2 support pieces can be attached to support the blade.
The base plank is supported by legs in the ends in a 20 degree angle at comfortable working height. To be able to work on the profile of the paddle, 20 mm (0.8 inches) holes for the holdfasts are drilled through the plank. To work on the flat side of the paddle one 3.5 x 3.5 cm (1.4 x 1.4 inch) piece is screwed on to the side, close to the bottom of the wide part of the plank, and another one on one of the support pieces for the blade support. These have vertical holes for holdfasts.
On the grip end of the workbench is a small piece of  wood which can be switched up to prevent the paddle from sliding back. Similarly on the blade support there are 2 stops at the paddle's tip which prevents it from sliding that way.
For the case where the blade support is very far from the shaft support I have drilled holes from the top in the narrowed down part and made extension pieces for the shaft that can be inserted using plugs.

It can be used for working on the paddle in both profile and flat view. Starting with a blank you remove the blade support and attach the blank to the side of the workbench using holdfasts. Here you can fine-tune the edges, then turn it and do the other side.
Now attach the blade support, put the paddle on top and adjust the distance of the blade support so it stops the paddle form sliding. Use holdfasts here too to keep the support in place.
Work down the blade however you prefer, I do most of the work using axe then flatten it with a plane and finally fine tuning using spokeshave. Do the grip while you're at it.
Now when you've done the thickness on one side you can flip the paddle, loosen the blade support and use 2 small wedges to get it to the right height before fastening it again.
Finally, to work on the shaft you can use holdfasts on the blade and grip then work it down using spokeshave, you will have access to two on the corners of the shaft unlike on an ordinary workbench where you only have access to one. 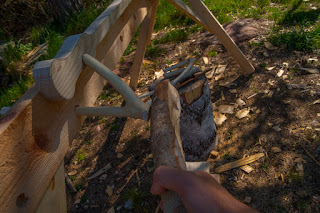 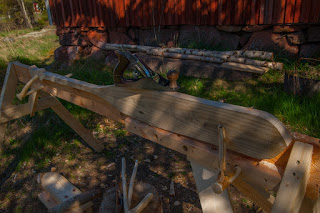 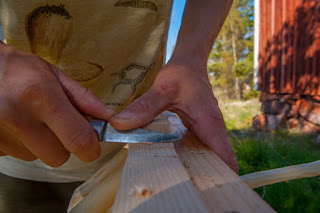 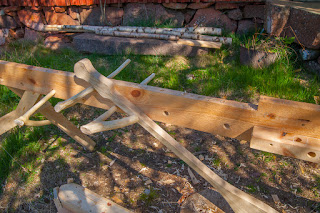 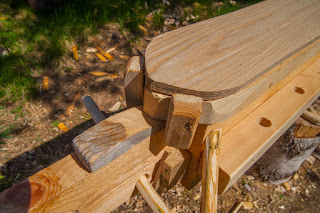 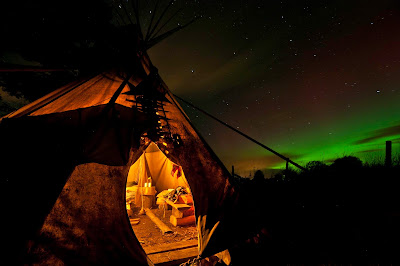 Now it's been a loong time since I last wrote something here. It's not because I haven't done anything, but rather because I have been doing a lot!
The biggest thing being planning for a 7 week canoeing trip in northern Finland (Ivalojki) the next summer. But more on that later.

As some of you know I lived 2 years in tipi in Sweden while studying bushcraft. After that unfortunately I moved and have been living inside for two years. But recently I spent one week in a tipi while building a canoe for the upcoming canoeing trip.And that really reminded me of how fantastic it is to fall asleep to the sound of the fire, and to wake up to the sound of the birds flying inside the tipi.

So when I got home I started researching how to build one. The one I used to live in was built after this instruction (Swedish):
http://www.naturligt-ute.se/pdf/tipibygge.pdf

So while designing my tipi I use that as reference. There is, however some things I see could be improved on that design:
The smoke flaps, for example. They are REALLY big. Both too high and too wide. So I wanted to make them smaller. The big size makes them flap in the wind and heavy to move.
The pinholes that keeps the tipi together are too big (3 cm in diameter). And they are on a separate piece of fabric, which is usually the first seam to break on a tipi. So I wanted mine on the main fabric, with no seams, possibly even some reinforcement. I also believe the holes are too close so I moved them further apart lengthwise.
The "doorstep" is very low, which makes the door quite low. As my friend Lovisa pointed out it's a good idea to make it higher to move the door up a bit.
I also adjusted the top of the tipi, where you tie the raising pole, after THIS instruction. That way I don't need the wedges to lengthen the smoke flaps.

So I needed some canvas for all this. In the Swedish instruction the width is 160 cm. There is no mention of the thickness. So I started researching the thickness needed. And damn it's confusing with the English/American oz per square yard and the rest of the worlds grams per square meter. I came to the conclusion that it should be at least 12 oz after reading THIS.
There is a Dutch site called Esvocampingshop which has some different canvas to good prices.
But even with these prices a tipi would cost over 400€. That's more than I can afford. So I kept looking.... and looking..... and looking.
And finally I found a good deal on EBAY. A 40 meter roll, which is exactly as much as I needed, of 12 oz cotton canvas. Only 147 cm wide though. But after some planning I came to the conclusion that it would still work. I ran 12 oz per square yard in a converter to g per square meters. And it says 406 g per square meter. Now if that is correct it's quite thick. I am not sure if my sewing machine will be able to sew it... But that's a later problem!

The fabric is scheduled to arrive around October 10. Until then I hope to find a big enough room to sew it in. I'm also gonna start looking for poles for the tipi.

Finally, here is my current tipi plan. It's not final. So if you have any input I would be happy to hear! 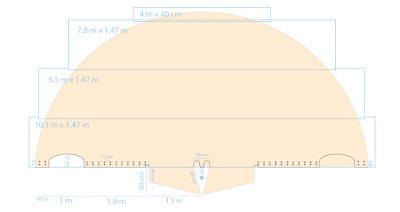 Update: The final plan is in part 2